1/13/14: Well, I've had my P85 for over a year and 20,000 miles now and look forward to every drive. I am updating my review and will attempt, as always, to provide fair and balanced information about my experience.

Many reviewers feel the need to be "for" or "against" this ground-breaking new EV. In feeling they must "take a position", they tend to be either EV-haters misrepresenting reality (Broder!) or over-the-top fans (most everyone else), both of which reduce credibility. As usual, the truth lies somewhere in-between and, like most things, there are good things and (just a few not-so-major) not-so-good things. I'm happy to report that the good FAR outweighs anything I deem as lacking, despite this being more than twice as expensive as any car I've ever purchased, I'm thrilled. In fact, I've never felt this way about a car before <3 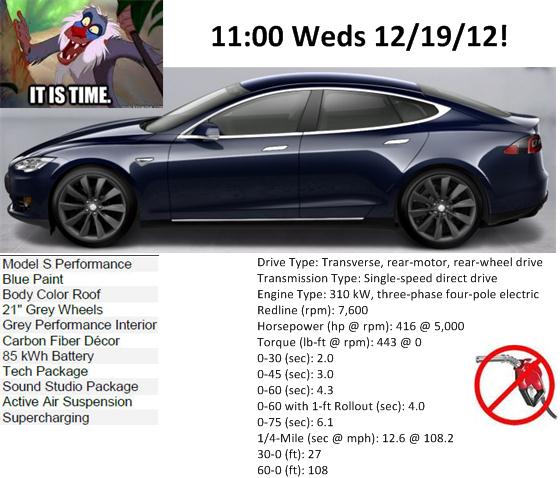 ...and I'm not mentioning all the "standard stuff" you'd expect from any car in this class.

Anyone who has done Product Management recognizes that the compromises made to ship ASAP and reduce the cash hemorrhage at TM. Making sure the hardware platform was solid and the quality was excellent was more important than being "feature complete" - as long as v1.0 had the essentials and a few "silver bullets" to wow customers and reviewers (and could be upgraded over-the-air later!). I expect that there will be many improvements...of course, until software features start rolling out that require a hardware upgrade! Note that nothing below has had a significant impact on my ability to use and enjoy the car except my one failure with the supercharging circuit.

Not fixable via software update:

It is amazing how short this list is for a car that has so much that is brand-new from the ground up and is about #2300 ever shipped. Tesla seems committed to making everything right, though they seem a little overwhelmed sometimes. Nothing here has kept me from thoroughly enjoying the car and driving it nearly 4000 miles in 2 months (I look for excuses to drive places!).

1/3/14: I'll detail below, but while the basic platform seems rock-solid and amazing, the "little things" have really added up. The excellent service (valet, Ranger) have made it as painless as possible, but if this were a Honda or Toyota with all these problems, neither I or other owners would be so forgiving. As Tesla moves beyond the fanatic early-adopters into the "mass consumer market" the customers are unlikely to be so forgiving. I sure hope that they get these "little things" under control

All that said, I am convinced of the Tesla team's commitment and dedication in resolving any issues that come up. Tesla has "owned up" to all problems (no attempt to charge for any of this) and nothing has interfered with my ability to love this car!

It is an awesome car that competes with the ICE cars in this class and beats them in many ways. It is a ground-breaking EV that is heaven for gadget and car folks alike. It is MADE IN CALIFORNIA! It proves you can have a car you really want to drive and is good for the environment without compromising. Granted, it is more expensive than many can afford - but it is competitive in it's class and not premium priced relative to its ICE peers. In fact, total lifetime ownership cost could be less (TBD battery aging/replacement cost...and what is the $600 per year service plan for again?). It is worry-free for around-town driving, but does require some planning and patience for road trips as charger locations and charge time can be a challenge depending on your route. That said, road trips can be done and be real fun, but they do require more planning and carry more risks of delays than with an ICE car.